White Giant is the first flight-ready liquid engine rocket engine developed by CUSF. The project was initiated in January 2021, with the goal of producing a 10kN engine burning isopropyl alcohol and nitrous oxide for the Griffin rocket. The engine used regenerative cooling with the fuel, has a designed burn time of 30-40 seconds and a low chamber pressure to reduce system mass. The precursor to White Giant is the White Dwarf test engine, which aims to test many of the principles of the full-size Giant (injection, cooling, plumbing, ignition) on a smaller and more manageable engine.

The White Giant engine was first conceived by Sam Ross in early 2020 as the booster engine for the (then-named) Martlet V two-stage rocket designed to pass the Kármán line. An initial analysis of the performance of this vehicle was presented at the 2020 AGM, where it was agreed that Martlet V would be the society's next project.

Early design work for Griffin (then Martlet V) using a White Giant engine as a booster stage. Modelling in RASAero II gave a maximum altitude of 171km with an optimistic mass fraction, demonstrating that a White Giant-based rocket was very capable of passing the Karman Line

The project was largely dormant during 2020, but was officially started in January 2021. The various subteams proceeded with literature reviews, exploratory modelling and some initial design work. As of April 2021, many of the teams are proceeding towards initial designs.

In order to build up experience for White Giant, the first engine produced by the society will be White Dwarf. This is a subscale engine that uses the same architecture for all critical components. The development and test firings of White Dwarf will allow the validation of much of the modelling carried out, as well as testing the ability of the society to manufacture and fire a liquid engine. The optimistic timeline for the White Giant program aims for a test firing of White Dwarf before the end of the 2021/22 academic year.

Due to the volume of work involved with White Giant, a number of sub teams with independent project managers have been formed. Each sub team is responsible for a particular key subsystem of the engine.

The cooling team oversee the design of the combustion chamber and nozzle assembly. Most importantly, this includes the regenerative cooling jacket around the engine, that prevents it melting. Over the past few months, the team have been working hard to develop mathematical models for predicting the temperatures and subsequent stresses across the engine for different designs. This research has culminated in the production of Bamboo, a software package in Python that allows for the optimisation of liquid engines. Using these simulations, the team has now focused onto practical manufacturing where Bamboo is used to evaluate the viability of low-cost alternative designs.

The injection system for White Giant is responsible for delivering the isopropyl alcohol and nitrous oxide to the combustion chamber while atomising and mixing them, so they may combust effectively. One of the main issues faced when designing an injector plate is that of reducing combustion instability, an effect that causes destructive vibrations and oscillations within the propulsion system, and often causes a rocket's early demise.

A software package called octopus was written in order to model the flow of propellant through the injector, and was used to specify design parameters for the injector plate such as total injection area and pressure drop.

The Tanks sub-team design both the flight and test-stand propellant tanks for Nitrous Oxide and Isopropyl Alcohol. For the test stand, a research conducive design is being developed to allow us to test the performance of the engine with different propellant conditions. Nitrous Oxide is a two-phase fluid at room temperature and is desirable for rocketry due to its ability to self-pressurise. However, different temperatures correspond to different levels of self-pressure as well as more subtle changes to part performance such as the injector designs. By having a tank that can change these conditions, we can gather data to allow us to validate our models and optimise our engine for things such as combustion instability.

The flight tanks are designed to fly on Griffin 1. Many options are being explored and evaluated for their performance and cost benefits. Innovative ideas such as a single flexible bladder tank may allow for significant weight savings, but may also be more costly and unreliable versus a more conventional design.

The Griffin test stand represents a significant step up in testing hardware from previous rockets. It will be designed to test many aspects of the overall flight system (cold flow, hot firing, pressure-testing tanks, instrumentation validation) with high quality hardware. 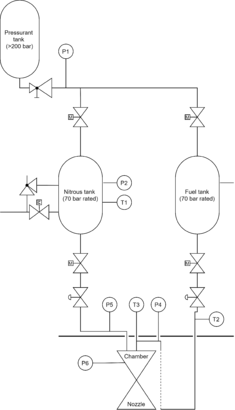 The P&ID diagram (plumbing and instrumentation diagram) showing the core of the hot-fire test stand.
Retrieved from ‘https://wiki.cusf.co.uk/index.php?title=White_Giant&oldid=459’
Categories: