From CUSF Wiki
Revision as of 11:43, 9 April 2022 by HFree (talk | contribs) (Created page with "== Overview == Pulsar is the hybrid engine used to launch Martlet 4. Pulsar development began in 2018 and represents the beginning of CUSF's work to build and fly its own...")
(diff) ← Older revision | Latest revision (diff) | Newer revision → (diff)
Jump to navigation Jump to search

Pulsar is the hybrid engine used to launch Martlet 4. Pulsar development began in 2018 and represents the beginning of CUSF's work to build and fly its own engines, as a reaction to the failure of Martlet 3's commercial solid rocket motor. As of 2022, Pulsar retains the record for the largest nitrous oxide hybrid fired in the UK, delivering a total impulse of 53855 Ns during its January 2019 test at Airborne Engineering. The test firing footage is available on YouTube.

The original team behind Pulsar founded Protolaunch before graduating. 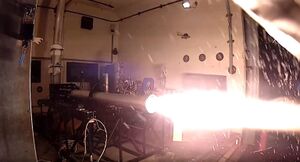 Pulsar during the firing at AEL in January 2019

The combustion chamber casing is over 1.6 m long and designed to withstand a nominal combustion pressure of 30 bar. Manufactured from aluminium 6082-T6 and lined with Tufnol, the case is protected ablatively against hot combustion gases while maintaining a lightweight construction. At the aft end of the casing, the exhaust nozzle is secured by a two-piece ceramic retaining ring and stainless steel insert. The nozzle itself is machined from Olmec Y459 fine-grained graphite, and the nozzle contour is an 80% length bell type. The nozzle expansion ratio was based on an exit pressure that ideally expands the exhaust at an altitude of 3 km, slightly increasing the average exhaust velocity and therefore Martlet 4's apogee altitude. At the forward end is the injector assembly, which passes both nitrous oxide and the gases used in Pulsar's original ignition system (a propane air burner design) into the combustion chamber. The nitrous oxide injector is configured as an impinging jet type.


Multiple independent safety features are built into Pulsar's nitrous oxide feed system, including a proportional pressure relief valve, burst disc and additionally a small, permanently open orifice vent hole in the propellant tank, which guarantees that the tank will gradually de-pressurise passively, even if all other systems were to fail. Although the 2019 test firing used a pneumatically actuated nitrous oxide main valve, Pulsar will be fitted with a smaller and lighter custom ball valve assembly for the flight of Martlet 4.